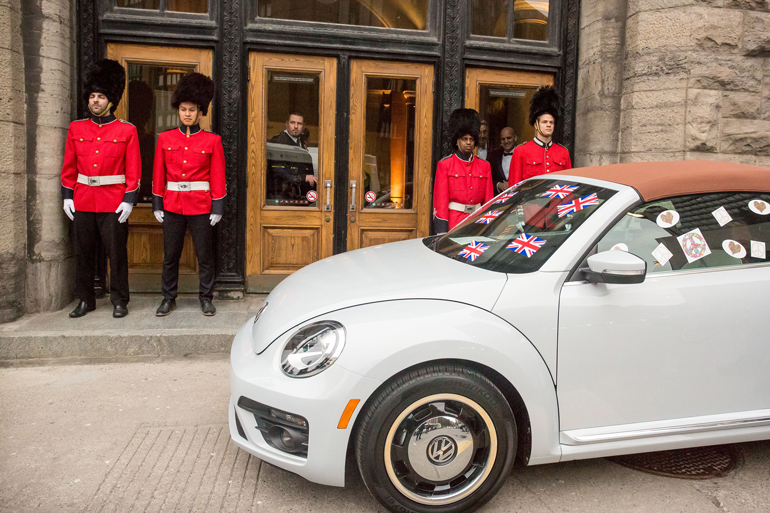 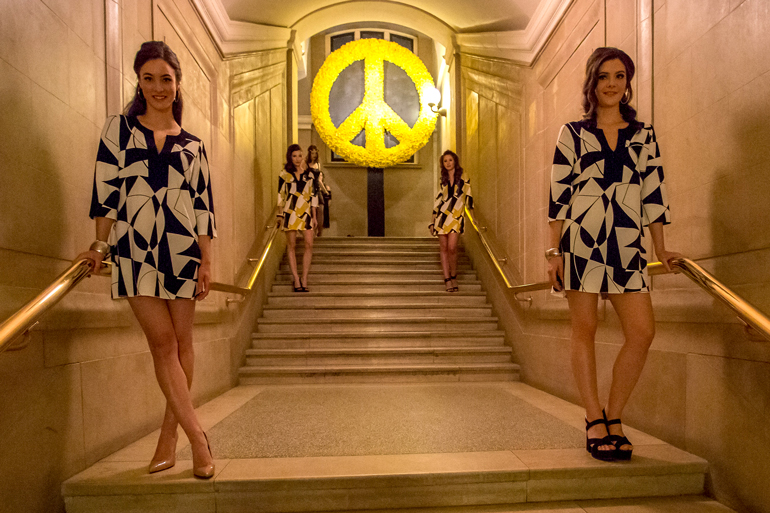 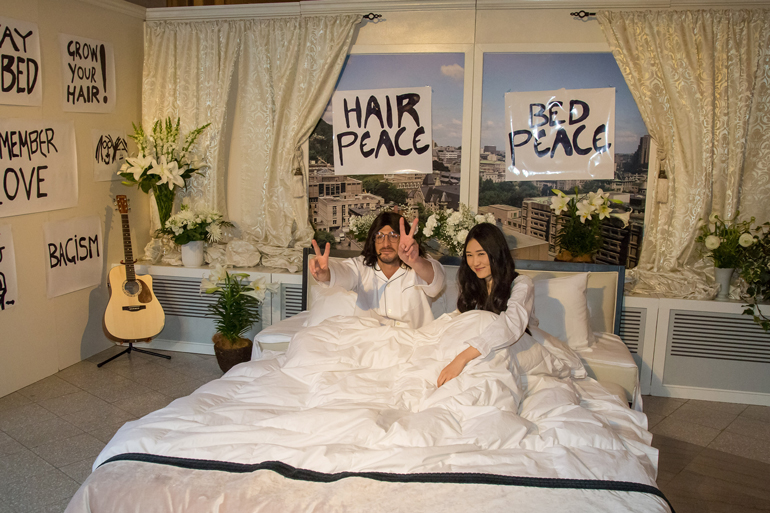 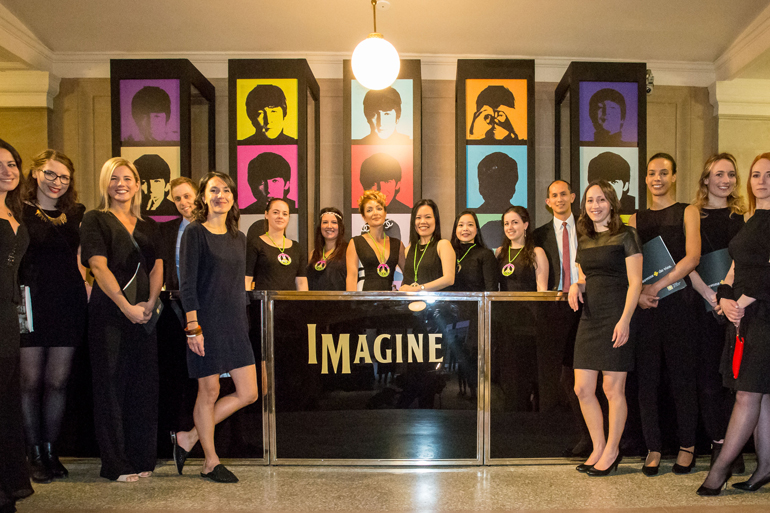 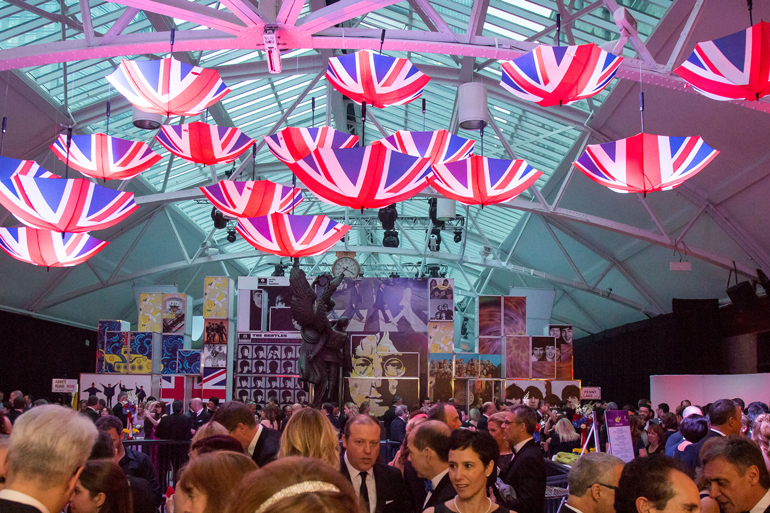 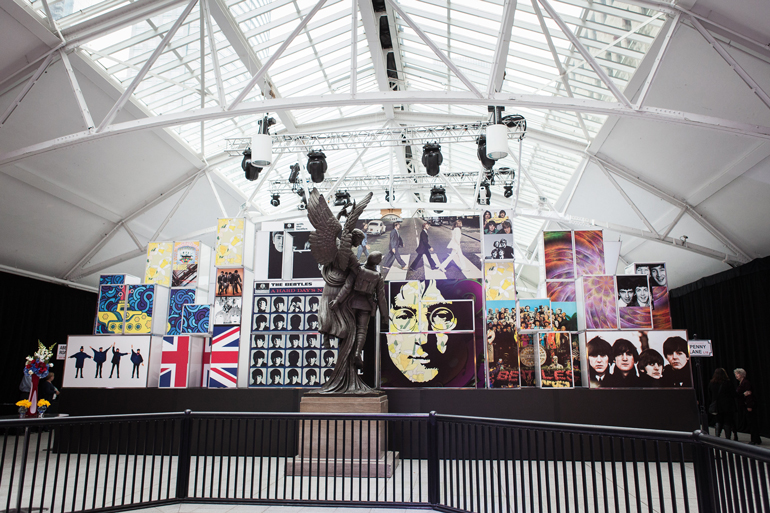 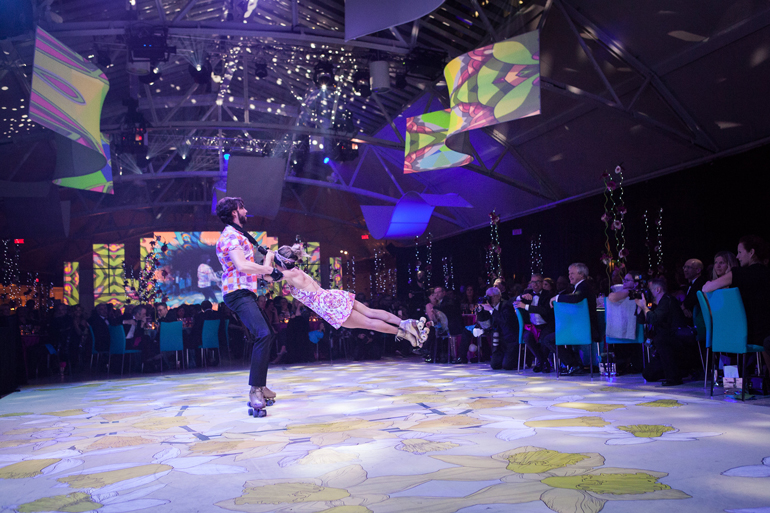 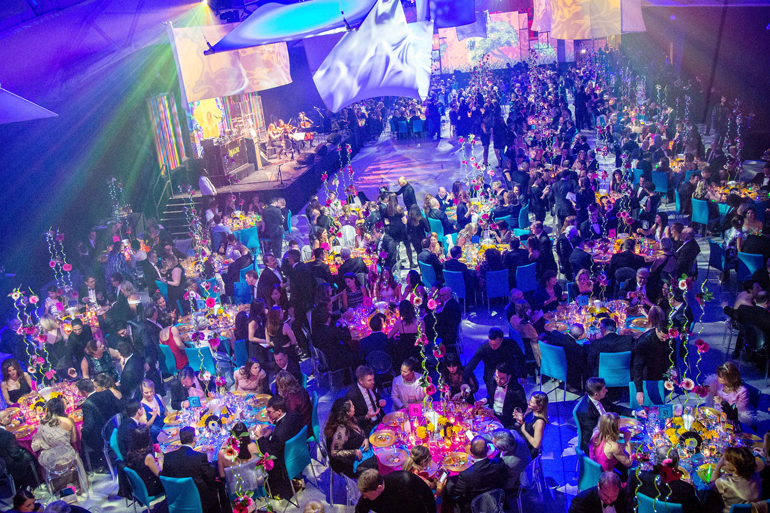 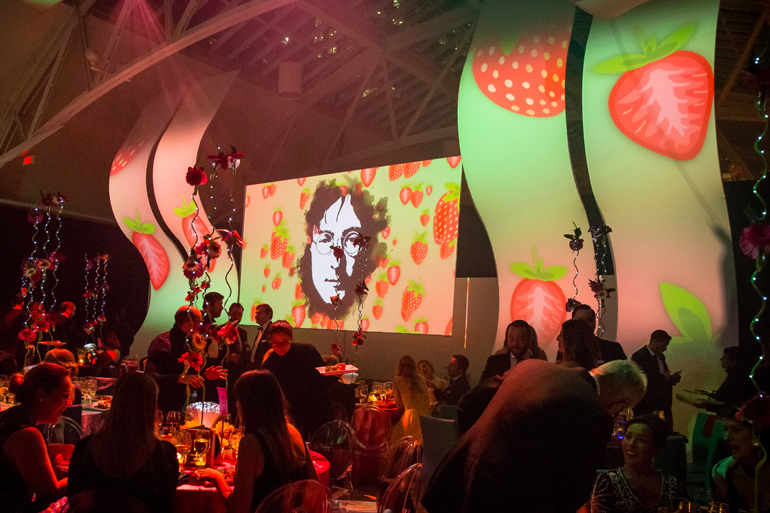 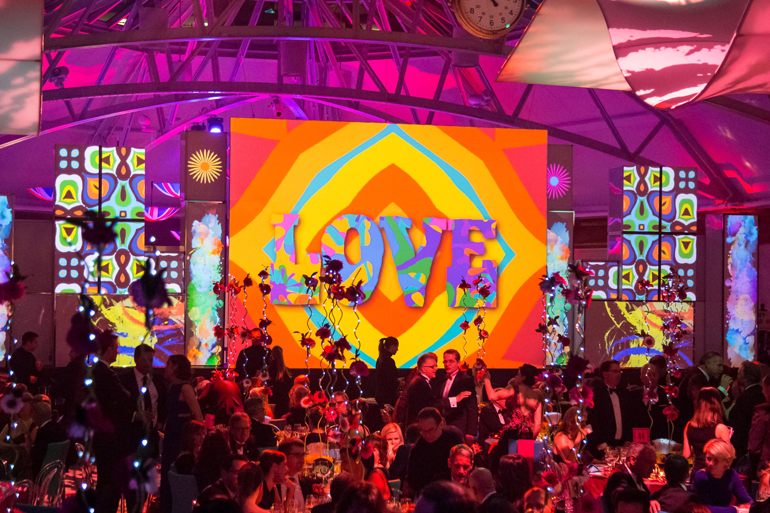 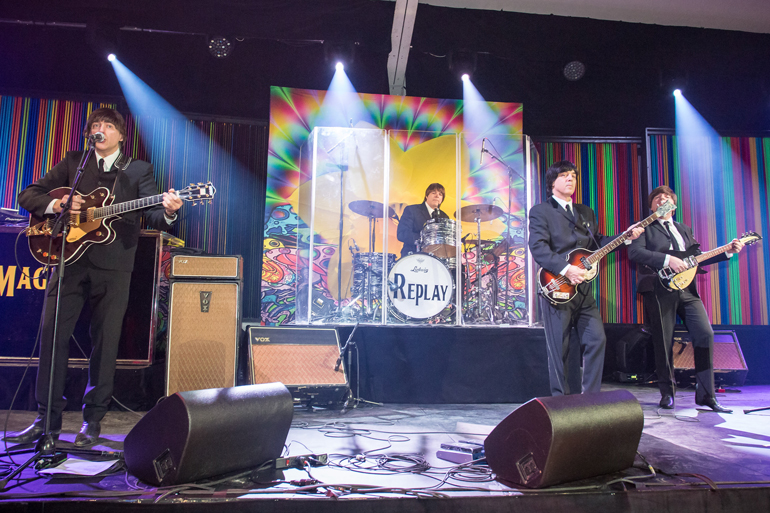 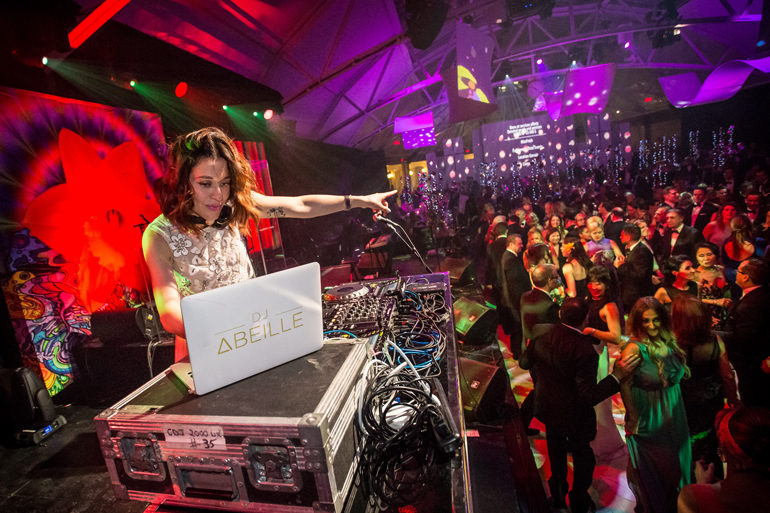 John Lennon would have been proud to witness the spectacle created in his famous band’s name to celebrate the 24th annual Daffodil Ball.

IMAGINE: The Beatles & Beyond was held April 20, 2017 at Windsor Station in Montreal. Produced by the uber talented Event Designer Alison Silcoff and her team at Alison Silcoff Events, this production is touted as the most successful cancer-related fundraising gala in Canada.

The inspiration for the event was based on the emergence of the iconic band and their influence on music and the cultural shift they created for an entire generation. Their powerful presence liberated England from the dreary, tradition-bound regime of decades gone by. They epitomized freedom – freedom from dress codes, freedom of expression, freedom from all the old rules, freedom to live a whole new life. The Beatles changed the landscape of music, changed the conversation and opened up a whole new world. That influence and appeal live on today.

IMAGINE: The Beatles and Beyond took guests on a visual and thematic experience, back to the Sixties to a time of artistic impression, but also continued beyond to a world where imagination has no limits where technology provides visual effects beyond all possibilities known at that time in history. It was total immersion executed in extreme detail. The experience began even before guests entered. A Volkswagen Beetle, the car of the Sixties embellished with Union Jacks and flower-encrusted peace signs was parked outside the Windsor entrance. Just inside, waiting to be discovered was a familiar Bed-In for Peace scene, complete with John and Yoko look-alikes and the sounds of “Give Peace a Chance” and “Imagine”.

Making up the main stage, an exploding psychedelic daffodil was centered on ribbon walls that created the illusion of multi-coloured waves with different lighting effects. The vinyl dance-floor mirrored the kaleidoscope daffodil design from the invitation. Even the washrooms continued the design treatment with over-the-top floral creations.

A total of 26,000 daffodils were used in the design and execution of the gala. The most striking design piece was a 40ft long by 16ft high “Mondrian inspired” 3-dimensional wall which divided the cocktail area from the dining-room. The wall was composed of 35 individual, different-sized rectangular blocks weighing more than 3,000 lbs in total. On the cocktail side, each block had a Beatles-inspired graphic applied to the surface, including many of the best-known Beatles record album covers. On the dining side, each block was used as a video-mapping surface. Total Events designed and implemented a new approach to the event’s decor putting focus on engaging and exciting  senses through the use of dynamic projection-mapping technology on a variety of 3-dimensional surfaces, rather than just static decor. This allowed the room to evolve, adapt and coordinate with each key moment of the evening. The video-mapping projected ever-changing visuals onto ribbon-like spandex structures suspended from the ceiling and cascading down the far wall, as well as onto the back of the Mondrian wall. Familiar Beatles icons – portraits of the Fab Four, yellow submarines, kaleidoscope eyes, strawberries, Abbey Road, marmalade skies and many more – were all integrated with psychedelic images into the constantly evolving scenes.

The centerpieces were 6ft long corkscrew-shaped metallic rods reflecting the spandex ribbon waves overhead. Fuchsia and hot-pink gerberas were attached at intervals along the entire length of each rod, with 20 LED mini-lights. At the base of each arrangement 3 vinyl 45 records with Apple labels, a fibre optic light and mini-containers of daffodils were arranged on turquoise metallic paisley print or raspberry textured silk linens. Rich ever-changing hues and special effects lit the giant ceiling ribbon treatments, tables and dance area.

Aside from the decor being a focal centerpoint to the event, the entertainment was just as integral in creating this Beatles sensory experience. Projection visuals were coordinated with the entertainment and themed dinner courses at key moments of the evening. Ensemble Tryade, a string quartet, played renditions of popular Beatles songs when guests first sat down for dinner. REPLAY, Canada’s most popular and authentic Beatles tribute cover band  performed two sets during the evening – one in costumes from the Ed Sullivan era, the other in the colourful Sgt. Pepper costumes. The Rock n’Rollers, world-famous roller-skaters Ryan Carrillo and Candice Heiden from California, performed a high-energy acrobatic roller-skating routine which was choreographed by award-winning three-time Emmy nominee Fred Tallaksen. Fred has choreographed for Madonna, J Lo and Enrique Iglesias as well as many other specialty performers and shows from Modern Family, the Grammy Awards and Rules of Engagement.

The dance party was brought to life by none other than celebrity DJ Abeille. This was the first time in 24 years that The Daffodil Ball has had a celebrity DJ.

No event would be complete without a Master of Ceremonies and this year’s event was hosted by the beautiful television and radio host Isabelle Racicot. Known for working with the chefs to create unparalleled menus, Alison did not disappoint. Caterer Fairmont the Queen Elizabeth created a menu inspired by Beatles song titles and iconic British dishes, with novel presentations, including:

The Daffodil Ball looks like a million-dollar event, but costs are dramatically reduced by the many generous donations of goods and services, including decor, design, the venue, lighting, AV equipment, prizes, gifts, advertising and many others – a total of $1,032,000.  The financial success of The Daffodil Ball would not be possible without these contributions.

The mission of the Canadian Cancer Society (CCS) is the eradication of cancer and the enhancement of the quality of life of people living with the disease. To achieve this goal, CCS leads the fight on several fronts: research, support for people living with cancer, prevention, information and advocacy. CCS funds more cancer research and has more impact on cancer in this country than any other national charity. Major progress has been made in the fight against cancer, yet the battle is far from over. More than one in three Canadians will develop cancer in their lifetime. No-one is safe from this disease, but together we can beat it.